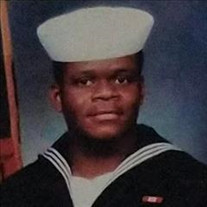 My Legacy On May 21, 1986, in Philadelphia, Pennsylvania, Brian entered this world to his loving parents Tyrone and Donna Bethea. We are devastated to say that our beloved Brian K. Bethea, passed away unexpectedly on March 15, 2022, at the age of 35, at St. Vincent's Hospital in Jacksonville, Florida. He will be deeply missed by his friends, family, and all who knew him. Brian was the most loving and sweetest little boy. He loved his family and shared an extraordinarily close bond with his older brother, Tyrone Bethea, Jr. and adored his big sister Melissa Jones. Brian led a typical life as a child and adult, but nothing about him was average. His presence could fill a room and your heart. He loved sports, especially football and baseball, both of which he excelled in. Brian graduated from Ed White High School in Jacksonville, Florida with a football scholarship to the University of Rhode Island. Always having a sense of duty and a love of his country, after attending college, Brian proudly accepted the call of service. Following in his father's footsteps, he joined the US Navy where he served as a Gunner's Mate Second Class. Brian was a devoted and loving son, brother, and uncle. He absolutely adored his mother and cherished the time they spent together. He enjoyed spending time with his family and traveling. He loved playing and watching football. All who were blessed to be in his presence, knew how big his heart was and how special he was. He was a spiritual man and was always willing to help. Brian is survived by his parents Tyrone (Christina) Bethea and Donna Bethea; his sister, Melissa Jones; his brother, Tyrone Bethea, Jr.; his maternal grandparents, Eddie and Gloria Gibson; his aunts, Gloria (Ricky) Stephenson and Ernestine Butler; his uncles, Kevin Bethea, Eddie Gibson, Gary Gibson, and Mark Gibson; his niece, Tyesha Jones; and his nephew Terrence Jones II and a host of cousins. He is preceded in death by his paternal grandparents, Ernest and Helen Bethea; and his uncles Ronald Gibson and Ernest Bethea, Jr. A visitation is scheduled from 10:00am-12:00pm, with a funeral service at 12:00pm, on March 29, 2022, at Five Points Chapel. A procession to his burial will take place directly after the service, and will be at Jacksonville National Cemetery. Flowers and condolences may be offered at Schnauss Funeral Home, 808 Margret Street, Jacksonville, Florida 32204.

My Legacy On May 21, 1986, in Philadelphia, Pennsylvania, Brian entered this world to his loving parents Tyrone and Donna Bethea. We are devastated to say that our beloved Brian K. Bethea, passed away unexpectedly on March 15, 2022, at the... View Obituary & Service Information

The family of Brian Keith Bethea created this Life Tributes page to make it easy to share your memories.

Send flowers to the Bethea family.