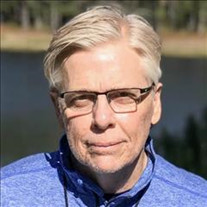 Family and Friends, It is with great sadness that our family announces the passing of Bryan Alan Smith, age 58, on May 27, 2021. He was born in Birmingham, Alabama and was raised in Miami, Florida. He graduated from Miami-Palmetto High School, attended Troy University, and moved to Jacksonville, Florida in 1984. Bryan was an open-level racquetball player, and it was during a tournament that he met Kandy, his wife of 33 years. They were married in 1988, at the Winterbourne Inn. Bryan started his 31-year-career with Republic National Distributing Company (RNDC - formerly NDC), a wine and spirits distributor, in 1987. He thoroughly loved his career and worked his way through successive positions and reached his goal of Division Manager. They had three wonderful children ..Austin, Jordan, and Brenna.. and Bryan took every opportunity to express his immense pride in them. The boys played sports year-round and Bryan loved to coach them. When Bryan was promoted to Division Manager-Pensacola in 2004, the family made their home in Gulf Breeze, Florida, for fifteen years. Bryan continued to coach the boys until their high school years, and then coached Brenna's softball teams. Brenna was a gymnast for many years and in all her time of competing throughout the southeast, Bryan never missed a competition or a soccer game when she played in high school. His devotion to his family was immeasurable � he especially enjoyed their family camping trips to the Smoky Mountains, family cruises, and family pool time. Bryan was an avid golfer and he played on many courses around the nation. He was also a Florida Gators fan and a sports enthusiast in general. He loved to attend sporting events of all kinds�golf, football, baseball and anything sports related. In Bryan's early married years, he spent much time slalom and barefoot skiing on their Mastercraft ski boat, and he enjoyed teaching friends how to do so. He also loved to travel, and his career provided many amazing trips over the years, most notably two trips to Italy, and many trips to tropical locations. Bryan was diagnosed with Idiopathic Pulmonary Fibrosis in 2012. In February 2018, he received a single lung transplant at Mayo Clinic-Jacksonville. Thanks to the generosity of his lung donor and their family, Bryan had three years of life that he otherwise would not have had, and our family is incredibly grateful for the extra time with him. Bryan truly lived life to the fullest � full of love, full of family, full of friends, full of fun, full of adventures, and full of hard work to make it all happen. And while there are no words to sufficiently portray his love for his family and friends, his children said it well � "Bryan was an inspiration to everybody in our family, both immediate and extended, and everybody who met him not only remembered him, but loved him, and those of you who were close to him know exactly why" and "he was the most loving dad I could've ever asked for. If you have ever met my dad before you know exactly what I'm talking about. He was one of a kind. I strive every day to resemble his love and passion for everything he ever did. I wouldn't be who I am today without him." Bryan is survived by his wife, Kandy; son, Austin, and his wife Caitlin; son, Jordan; and daughter, Brenna; and one grandson, Brandon "Big B." Also, he has an extended family of many loving aunts, uncles, cousins, nieces, and nephews. And, he has countless friends who he loved as if they are family � to him, they all are. While we are heartbroken that Bryan is gone, we have faith that his health is now restored, and he is in the arms of his Lord. He is re-united with his parents Joseph Hilliard Smith Sr. and Margaret Louise Bryan Smith, and all his siblings, Patricia, Cindy, Joe, and Morgan. Those of us here on Earth can only imagine the shenanigans they are all having together. In lieu of flowers, memorial contributions can be made to: The Gabriel House of Care (www.gabrielhouseofcare.org ), where Bryan and Kandy lived for several months during Bryan's recovery from his lung transplant. Also, the Pulmonary Fibrosis Foundation (www.pulmonaryfibrosis.org). A Memorial/Celebration of Life is planned for Saturday, June 26th at 2:00 at the Legacy Lodge at Oaklawn Cemetery at 4801 San Jose Blvd in Jacksonville, 904-737-7171, www.dignitymemorial.com .

Family and Friends, It is with great sadness that our family announces the passing of Bryan Alan Smith, age 58, on May 27, 2021. He was born in Birmingham, Alabama and was raised in Miami, Florida. He graduated from Miami-Palmetto High School,... View Obituary & Service Information

The family of Bryan Alan Smith created this Life Tributes page to make it easy to share your memories.

Family and Friends,
It is with great sadness that our family...

Send flowers to the Smith family.