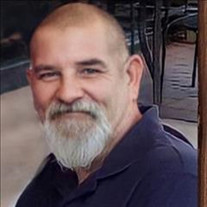 Christopher Daniel Warren, foodie, dapper dresser, world trail traveler, gearhead, husband, dad, son and brother, died on Friday, August 20, 2021. Chris was smoking and locally sourcing his meats long before the television big shots knew smokers existed. Years ago turning an old side gas tank from his father-law's tractor-trailer into an ingenious smoker for his famously delicious slow-smoked brisket and ribs! For his smoked goodies, store bought sauces were not up to his taste, so they were made complete with his secret family bbq sauce recipe! But he didn't stop there! He would provide for family and friends some of his favorites - low country boils, crab legs, oysters, meat loaf, and his secret recipe german chocolate cake! The man loved to cook! But more than cook, loved to watch you enjoy his cooking! Particularly loved cooking for his wife and boys. Chris had a distinctive fashion sensitivity. He was born and raised in Florida. It is mostly hot and humid in Florida. Therefore, why would anyone in their right mind wear anything but shorts and t-shirts. Well there were special occasions where he knew he needed to dress up a bit, like going to a special dinner with his girl Holly, and he would go "business attire" and put on a "collard" shirt. And even an occasional really important event, he would put on a pair of jeans or khakis. But for anyone with any fashion sense living in Florida - only wear shorts year round - too hot, too humid for anything else, he hated pants. To say that Chris loved to travel isn't entirely true. He didn't really travel much at all. It was really the MODE of travel which he loved. He was an all out gearhead. Didn't really matter what it was as long as he could drive it! It started at age 11, when his parents bought him his first ATV. They lived out in the country, his daddy had some dirt hauled onto their property and created a track with hills, ramps, and holes to have great ATV adventure. Those led to riding the pine forest trails adjacent to their land, to trucks, and Jeeps, motorcycles and his beloved BMW E46 M3. One of his favorite activities was riding the trails in one of his Jeep's with his family. These trail riding experiences were reinforced by Chris' hunting with his daddy in the Osceola National Forest, where riding for hours through dirt roads and Jeep trails were part of the ever elusive search for the "big buck". Just recently during a "blood moon" he said he had a day riding the woods in one of the Jeeps with Holly and Brett. Stopping in the night, gazing at the moon, and cooking hot-dogs over an open flame, in the middle of a trail, "doesn't get any better than that" he said. He loved all of his gear head endeavors, but none more so when he was riding with his boys or his wife Holly. He passes on his gear head ways to his heirs. In any conversation with Chris, it was ALWAYS peppered with "I was talkin to a buddy of mine�". This wasn't a manner of speech as one often does. Nope - he was actually talking about a friend. He had so many "buddy's of mine" that it was irritating and exhausting. Who wants that many "buddy of mine" folks in their life? It was weird. Indeed he was a person who never seemed to meet a stranger, but for whom everyone he met, seemed to become a friend. Chris didn't put much value on things, but put huge amount of value on people - you know the "buddy of mine" folk which you might have been - loved, laughed at, adored, admired, valued. Yet as important as all his buddies were, his most prized an valued "buddies of mine" above all were his Holly, and boys, Ethan and Brett. Yes it all started on January 6, 1971, when Chris was born in Jacksonville, Florida to loving parents, Dean & Donnie (deceased). He loved and loved to aggravate his older sister and brother and their spouses Ray (Jill) and Marie (Mark). Too he loved his nieces and nephews - Jonathon, Rachel, Taylor, and Evan and Grant. His life really started gearing up when he married his High School sweetheart, Holly Jones on Sept 10, 1994. He was still making her omelettes a couple of weeks ago, still making her laugh today as she remembers his crazy antics the love and life he and she made. The absolute best possible blessings for Chris and Holly were when they had their two boys, Ethan (11-1-99) and Brett (4-10-2003). Chris loved his food, cooking, buddies, fishin and his cars. But make NO MISTAKE, he LOVED & LIVED for his family - HOLLY, ETHAN and BRETT. Oh, lest we forget, he really loved to pieces the girl he called "my daughter-in-law" Sam (to whom Ethan has been attached for nine years). If you would like to make a memorial contribution in Chris' name, we ask that you do so to one of these two organizations which have been tremendously important to Chris and our family - Eagle's view Academy Community Hospice 7788 Ramona Blvd. W. 4266 Sunbeam Road Jacksonville, Florida 32221 Jacksonville, Florida 32257 Phone 904.786.1411 Phone 866.253.6681 Online - communityhospice.com

The family of Christopher Warren created this Life Tributes page to make it easy to share your memories.

Send flowers to the Warren family.