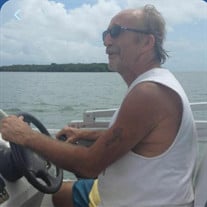 William "David" McBride entered peaceful rest on June 10, 2021, at the age of 63. David was born on June 30, 1957, in Washington, Indiana. He was raised by his beloved grandmother, Bessy Mae "Merry" McBride and his father John W. McBride. David graduated college with a degree in accounting, then began a lifelong career in hotel and condominium management. He came to Florida in 1983, working in Cocoa Beach and then New Smyrna Beach, before retiring in 2021. David was a dedicated, hardworking man. His priority was always being a good provider and making sure his loved ones were taken care of. His family took first place in his heart, he had the biggest heart. There was nothing he would not do for anyone. He never passed by a homeless person without buying them a meal. That is who he was. When everything at work was completed, he loved to be out on the Indian River, in his boat, fishing. During football season, he enjoyed watching the Miami Dolphins with his daughters. Medical problems never slowed David down, he continued to work despite having kidney failure as a young man. He had two kidney transplants, the last one in September of 1991, which was successful and gave him a beautiful new life. The National Kidney Foundation Annual Surf Fest in Cocoa Beach was something he loved and supported. His grandson, Chandler surfed in the competition in September 2014. Yes, David was on the beach proudly watching, as his grandson honored him. David was preceded in death by his grandmother, father and daughter Lacy Jane. David is deeply loved by his wife, Deborah McBride of almost 23 years, they were married on his birthday June 30, 1998. He is also survived by the beloved mother of his two dear daughters, Mary Flynn Hollister, who remains as a special part of our blended family. Also, survived by his brother, Lane McBride, dear cousin Teresa Baker and many relatives both deceased and surviving in the Indiana area. David had 4 children, his daughters Lacy, Cristina, Nichole and his son, Sam. He taught his children to fish, and even patiently helped them to bait their hooks, when necessary. His love paid off; his life was blessed with a large family. David was affectionately called "Grumpy", by 10 beautiful grandchildren: Coral, Chandler, Jillian, Sunnie, Kaylin, Dominic, Dalton, Danica, Sebastian, and Landon. He also enjoyed the recent addition of 3 adorable little Great Grandbabies: Luna, Kaiden and Leo. During his long stay recently at Mayo Clinic awaiting a heart transplant, they all assured him "Grumpy, you have our heart"; prior to his hospitalization his family and many friends surprised him with a "Get Well Grumpy" party. Indeed, he had all our hearts. His doctors and the staff told him every day about how strong and brave he was. Yes, he was. David fought hard to stay with us, but we are comforted that he is resting peacefully now. Thank you for reading, Please share any memories and photos, we love you and we know how much he will be missed. The Family of David McBride In lieu of flowers, please donate to the National Kidney Foundation Local Arrangements entrusted to Naugle & Schnauss Funeral Home & Cremation Services, 808 Margaret Street, Jacksonville, Florida 32204, 904-683-9288

William "David" McBride entered peaceful rest on June 10, 2021, at the age of 63. David was born on June 30, 1957, in Washington, Indiana. He was raised by his beloved grandmother, Bessy Mae "Merry" McBride and his father John W. McBride. David... View Obituary & Service Information

The family of David McBride created this Life Tributes page to make it easy to share your memories.

Send flowers to the McBride family.