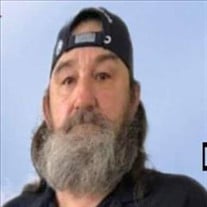 Donald Travis Varnadore September 23rd, 1962- October 23rd, 2021 Mr. Donald Travis Varnadore, 59, of Jacksonville, Florida passed away on Saturday, October 23rd, 2021. Mr. Donald Travis Varnadore was the late son of Robert Varnadore, Sr. & Pearl Varnadore. He was the brother of Robert Varnadore, Jr. (Lucinda). Sylvia Hersey (Wayne), Marie Varnadore, Margaret James (Paul), Erwin Varnadore, Lucile Livingston (Lloyd), Teresa Hamilton (Jimmy), Wendell Varnadore (Lora Lee), Cindy Williams (Louis), Amanda Pitts (Anthony). Mr. Varnadore was survived by his wife Patricia Varnadore, son Jonathan Varnadore and great- niece Aerianna Varnadore. Mr. Donald Varnadore had lots of nieces and nephews along with great and great-great nieces and nephews. He also had many adopted God children. There was NEVER a child that didn't LOVE Donald. He made them all his babies!!! You will be Forever in our hearts. The Lord's Prayer Our Father, Who art in heaven Hallowed be Thy Name; Thy kingdom come, Thy will be done, On earth as it is in heaven. Give is this day our daily bread, and forgive us our trespasses, as we forgive those who trespass against us; and lead us not into temptation, but deliver us from evil. AMEN.

The family of Donald Travis Varnadore created this Life Tributes page to make it easy to share your memories.

Send flowers to the Varnadore family.