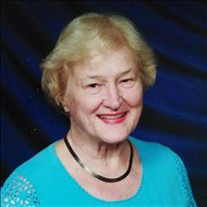 Not sure what to send?

Emily Garrett Miller died on Sunday, April 24, 2022. She was born in Waycross, Georgia on August 6, 1924. She was raised in Waycross but has fond memories of her few years spent in Columbia, SC during the Depression. Emily had an idyllic childhood filled with wonderful and occasionally poignant memories. At her elementary school, scholars scoring 100% on their weekly spelling test earned the privilege of sliding down the fire escape slide. She recounted that she left the "i" out of "carriage" on one test and was mortified that she could not slide. She graduated from the University of Georgia, and attaining Phi Beta Kappa was one of her proudest achievements. She was a member of Alpha Delta Pi and Phi Kappa Phi. She earned her MA in Education at the University of Florida, where she met her husband, James Edward Miller. She said it was love at first sight and she could not eat for 2 weeks after meeting him. They were happily married for 59 years until his death in September 2009. Emily taught math in Duval County schools for 31 years, at Robert E. Lee, J.E.B. Stuart, and other schools. She and her husband were world travelers, visiting Europe many times, Hong Kong, and Egypt. There was not much that Emily could not do. She was a top-notch pianist and cellist who played in quartets. She took up sailing in her 50s. She played tennis and golf and walked daily. She once was a realtor/appraiser. Emily is predeceased by her parents, husband, and sister (Jean Garrett Jeffords). She is survived by her four children: David Miller (Marsha), Constance Miller Braid (Derek), Norma Miller, and Garrett Miller (Kathy). She also has 9 grandchildren: Courtney Miller; Emily, James, Duncan, and Robert Braid; Laura and Anne Miller; and Margaret and Jean Miller. Services will be held at 1pm on June 4th at the Episcopal Church of the Good Sheperd. In lieu of flowers, the family requests that you donate to the Episcopal Church of the Good Shepherd or Lutheran Services in her name.

Emily Garrett Miller died on Sunday, April 24, 2022. She was born in Waycross, Georgia on August 6, 1924. She was raised in Waycross but has fond memories of her few years spent in Columbia, SC during the Depression. Emily had an idyllic childhood... View Obituary & Service Information

The family of Emily Garrett Miller created this Life Tributes page to make it easy to share your memories.