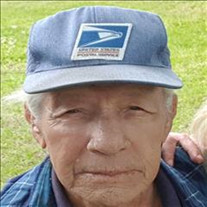 Everett Edward DuBray, Jr. passed away on Sunday, June 6th, 2021 at the age of 83, after a long battle with cancer. Everett came into the world on October 5, 1937, in Rosebud, South Dakota. He was baptized on January 10, 1938, at the age of 3 months and was a lifelong Episcopalian. He began his life by spending most of his time with his grandparents, the Reverend Joseph DuBray, and his grandmother Mary. He then attended elementary school in Rio Arriba County, New Mexico. At 17 years of age, he joined the Navy in California and served in the Korean War on a ship as an airplane captain. Upon his return from Korea, in 1956, he was transferred to Jacksonville. After getting married and settling down, he joined the army and was transferred to Virginia Beach, Virginia. Once he left the army, he continued to serve through the US Postal Service until his retirement. Young Everett always loved sports! He enjoyed playing baseball, tennis, basketball, and especially golf. He was an avid golfer, but also a great dancer. He loved practicing square dancing and disco dancing back in the day, and beach bopping way back in the day. He also liked ice skating, water skiing, boating, and riding his Yamaha 750. When he was 45, he invested in a property in Jacksonville, Florida and he spent many years well into his retirement developing his ranch from scratch, where he cleared the land, built a house, and at times raised some cattle and horses. Everett was also an adventurous traveler, driving across the US many times to destinations such as South Dakota to New Mexico, from Arizona to Utah, or California to Florida, Everett loved to hit the road and discover America. He also lived and worked in Memphis, Tennessee for several years in the 1980s. Everett also traveled to Europe several times to visit his daughter and grandchildren in France and enjoyed such moments as winning big at the casino in Paris, dining on the first floor of the Eiffel Tower: visiting castles in Perigord and the beaches of Normandy. He spent the turn of the millennium attending a huge celebration in a French castle, he also traveled under the channel from Paris to London. Though he spent much of his life seeking new ventures, he always returned to his home in Jacksonville, Florida. Mr. DuBray is survived by his daughters, Kim and Jolene, his sons, Jonathan, David, and Christopher, his sisters Rochelle Joan Toutges, Patricia Ann Jones, and Andrea Roselyn, his brothers Frederick Joseph DuBray, and Roger Hernandez, his 15 grandchildren, and his 8 great-grandchildren, along with numerous cousins, nieces, and nephews. He is predeceased by his sons, Eric and Everett III, and his grandson, Everett IV, his father, Everett, Sr., his mother, Floreine (nee Frederick), his sisters Roberta, Eleanor, and Jacqueline, and his brother David. The Memorial Service, followed by a reception and a celebration of his life will take place on Saturday, June 26th at 2:00 at St. Mary's Episcopal Church 400 St. Johns Ave Green Cove Springs, FL Flowers or donations can be sent to 1317 Blackmon Road, Green Cove Springs, Florida 32043, or can be ordered through Divine Florist of Green Cove Springs 904-531-9528. Local arrangements under the direction of Naugle & Schnauss FH & Cremation Services, 808 Margaret Street, Jacksonville, Florida 32204, 904-683-9288

The family of Everett Edward Dubray, jr created this Life Tributes page to make it easy to share your memories.

Send flowers to the Dubray family.