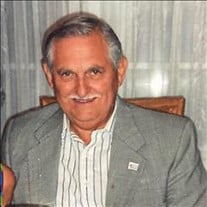 "Mack Hamilton Richardson, beloved Husband, Father, Grandfather, Great-Grandfather and Friend of Jacksonville, Florida went to be with the Lord on January 10th, 2022. He was 85 years old. Mack Richardson was born in 1936 to Horace and Alli Richardson. He graduated from Bob Jones University in 1958 with a bachelor's degree in Bible, and from Auburn University in 1972 with a Masters degree in Education. As an upperclassman at BJU he was a yearly attendee of Freshman orientation to collect the names of women that caught his eye. Upon seeing Teresita, he threw away his list and declared "I am marrying that woman!" which he did on July 12,1958 Mack worked as the founding principal at Victory Christian Academy, taught Math and English in the Jacksonville school district and was a rural mail carrier for over 20 years. He and his wife were active members at First Baptist Church of Jacksonville Florida where he served as Outreach Leader and Sunday School teacher. Mack never met a stranger. His love for people combined with his love for Jesus propelled him to share the Gospel with many people. Heaven is all the richer for it. He is survived by his wife, four children, Teresa, Marisa, Tamara and Maurice, fourteen grandchildren, John, Tiffany, Justin, Austin, Alainna, Martin, Rebecca, Kenzlyn, Hannah, Zachary, Lydia, Nathan, Quentin, Rachel, and eight great grandchildren. Mack was a lifelong fan of the Atlanta Braves and counted their recent World Series win as a highlight of the year. He was also an avid fan of the Jacksonville Jaguars. Devoted to the end, the Jaguars' victory over the Colts was Mack's final game. A memorial service will be planned for a future date. "

"Mack Hamilton Richardson, beloved Husband, Father, Grandfather, Great-Grandfather and Friend of Jacksonville, Florida went to be with the Lord on January 10th, 2022. He was 85 years old. Mack Richardson was born in 1936 to Horace and Alli... View Obituary & Service Information

The family of Mack Richardson created this Life Tributes page to make it easy to share your memories.

Send flowers to the Richardson family.