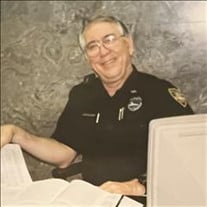 Retired Officer Robert (Pete) Eugene Starling, age 79, passed away peacefully in his Jacksonville home early Tuesday, January 11, 2022, surrounded by his family. Officer Starling was born in 1942 in Columbia, South Carolina. One year later, he moved with his family to Jacksonville. He graduated from Robert E. Lee High School, Class of 1960. Immediately after graduation, he joined the United States Air Force, where he proudly served his country in Thailand during the Vietnam War. After serving eight years of active duty, Officer Starling attended the University of South Florida at Tampa, where he graduated in 1972. Following graduation, he joined the Florida Air National Guard, retiring with 25 years of service. During that time in 1974, he became an officer with the Jacksonville Sheriff's Office, where he served with honor for 25 years until his retirement in 1999. After that, he was a sworn bailiff until 2002. Following his retirement, Officer Starling enjoyed traveling with his wife and spending time with his grandchildren and their many activities. He also enjoyed spending time with his beloved dogs. Officer Starling is survived by his wife of 60 years, Elaine Perry Starling, his two sons, Michael Robert Starling (Crystal) and Wesley Edward Starling (Valerie), and his five grandchildren. A Memorial Service will be held, Friday, January 14, 2022 at 11am at St. Paul's Catholic Church in Riverside. The interment will immediately follow at Evergreen Cemetery, followed by a Bereavement Reception at St. Paul's Catholic Church in Riverside. In lieu of flowers, a donation made in Officer Starling's memory to St. Paul's Catholic School, Community Hospice of North Florida, or a charity of your choice would be appreciated.

The family of Robert Eugene Starling, Jr. created this Life Tributes page to make it easy to share your memories.

Send flowers to the Starling family.