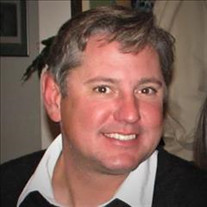 On Sunday, October 17, 2021, Stephen Gray Buchanan, loving father of Gray James and Zoe Elaine, passed away. Stephen was born in Jacksonville, FL on April 21, 1971 to Diane Buchanan Parker and Harold Buchanan (Barbara). He attended Fishweir Elementary, Lake Shore Junior, and Sandalwood High schools. Stephen was passionate about many things; Gray and Zoe, skateboarding, racing sailboats, model building, animals, aviation, and his great group of friends (aka The Dog Jaw Posse). He was an athlete and when Stephen discovered skateboarding, quite naturally, he excelled. Stephen spent hundreds of hours practicing skateboard tricks and competed in skateboarding contests. He was a regular fixture at Kona Skateboard Park and eventually, was proudly sponsored by Powell Peralta. Stephen always had an interest in nature and animals. As a child he had a cat, ducks, hamsters, and the best dog that ever lived; Piewacket Buchanan. As an adult he loved Ollie and Pup-Pup (his two beautiful Boxers), komodo dragons, and an assortment of tortoises (including two giant tortoises that roamed around his backyard and ate grass and hibiscus flowers). Stephen loved nature and enjoyed creating butterfly gardens. If he had trouble locating a particular type of host plant for a specific butterfly species, he may have "borrowed" a plant or two from a local park. Stephen made sure to keep bird and hummingbird feeders full and enjoyed feeding the gaggle of geese that made a home in his mom's backyard pond. Not only did his Dad take him to airshows, he also took him flying. This planted the seed for Stephen's love of aviation. He enjoyed building model airplanes, learning about airplanes and jets, and flying. Even after his traumatic brain injury, Stephen successfully completed, and earned his certification in an Airframe Mechanics course at Cecil Airfield. He had an amazing smile and a great sense of humor and loved to tease his family and friends. I hope he did his Harry Carey impersonation for you. He picked it up from SNL's Will Farrel. Stephen also enjoyed sailing. He was an accomplished yachtsman and was frequently asked to skipper other sailboats in various regattas. Locally, he and his crew won the Northeast Florida Sailboat Association's "Perpetual" Trophy in their category for go-fast races in the ocean and on the St. John's River. Stephen's greatest joys in life were Gray James and Zoe Elaine. He loved taking them on adventures which included sailing, skateboarding, nature walks, canoe trips, or just playing in the backyard. He would ALWAYS tell family and friends how much he loved Gray and Zo-Zo. Stephen is survived by his children, Gray James Buchanan and Zoe Elaine Buchanan, parents Diane Parker and Harold (Barbara) Buchanan, sister Amy Buchanan Vann, Uncles, Aunts, two nieces, one nephew, and many cousins. He is preceded in death by his grandparents and cousins Chad Parker and Katie Parker. Stephen (although he preferred Steve) leaves behind an incredible group of loving friends (including but not limited to); Cliff Miller, Lep and Abigail Stewart, Kevin Davis, Grif Helwig, Mike Hartley, Nick Serrano, Roger Dailey, Chris Capo, Chip Southworth, Kevin Lambert, Robbie Craig, Buck Smith, Mark George, Robert and Anne Wetmore, and Mike Bozeman. A Celebration of Life for Stephen will be held Sunday, October 24th at 2 o'clock in the afternoon at Thunderbolt Elementary School 2020 Thunderbolt Road, Fleming Island, FL 32003. We hope family and friends will share stories and sweet memories of Stephen during the celebration. Stephen didn't own a suit as he was a t-shirt, cargo shorts, and flip-flops kind of guy. Feel free to dress casually for his celebration. In lieu of flowers, please consider making a donation in Stephen's name with the Epilepsy Foundation of Florida https://www.epilepsyfl.com/# . To live and to love brings great joy and great sorrow. To not know one is to not know the other.

The family of Stephen Gray Buchanan created this Life Tributes page to make it easy to share your memories.

Send flowers to the Buchanan family.