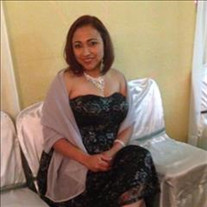 Yajaira Moran was born on July 5, 1981 in Managua, Nicaragua. She moved to the United States on March 3, 2000. She met her husband that same year. She has three beautiful daughters: Yuliana Nunez, Yajaziel Nunez and Yiseily Nunez. Yajaira loved traveling, laugh and food. She spent a lot of her time making meals for her family and her church. She also sponsored children living in Guatemala, sending them clothing and gifts for many years. She loved to binge watch shows and movies, especially true crime and psychology thrillers. She loved worshiping in her church and thankful for her church family. Yajaira was diagnosed with stage four breast cancer in 2020 and it became very aggressive, and spread throughout her body. She still worked, and fought really hard and maintained her faith through those two years. She always believed in a miracle. Yajaira lived well past what her doctors said she would; that in itself was a miracle. She never stopped laughing or traveling or doing the things she loved. She is survived by her husband, Julio Nunez; daughters Yuliana Nunez, Yajaziel Nunez and Yiseily Nunez; her brother Francisco Moran and his wife Gema Campos; her best friend, who was more like a sister, Marlen Velasquez and her daughters Yessica Romero, Geisy Romero, Dayani Velasquez and Marlen Ester (Yajaira's god daughter); her tias Luz Marina and Maria Salvadora; her grandfather Roger Moran; her father Francisco Moran; her niece and three nephews; and her church family. Yajaira's mita Ana Moran Jarquin, and her sister Tania Lopez, passed away the same year she was diagnosed with cancer, and yet she remained strong throughout the two years she had left. Yajaira left her family with many happy memories, and they know she is in a better place with peace and feeling no pain. "I will lie down and fall asleep in peace because you alone, LORD, let me live in safety." -Psalms 4:8 "I have fought the good fight, I have finished the race, I have kept the faith. Now there is in store for me the crown of righteousness, which the Lord, the righteous Judge, will award me on that day-and not only to me, but also to all who have longed for his appearing." -2 Timothy 4:7-8

Yajaira Moran was born on July 5, 1981 in Managua, Nicaragua. She moved to the United States on March 3, 2000. She met her husband that same year. She has three beautiful daughters: Yuliana Nunez, Yajaziel Nunez and Yiseily Nunez. Yajaira... View Obituary & Service Information

The family of Yajaira Del Socorro Moran Lopez created this Life Tributes page to make it easy to share your memories.